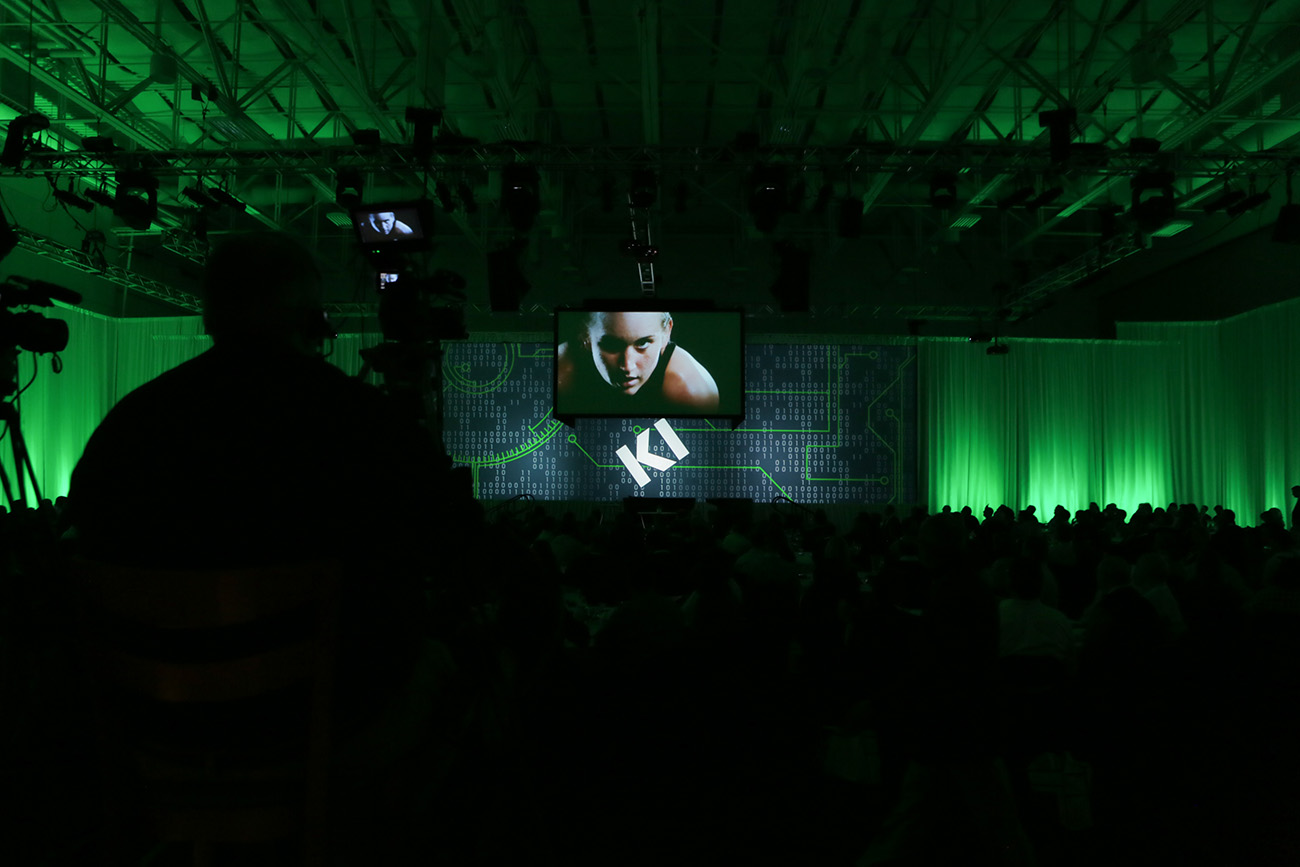 I was lucky enough to get the opportunity to continue my passion for live directing with Tri-Marq up in Oshkosh, WI at EAA AirVenture 2014. Tri-Marq produced over 50 hours of live video spanning the entire week of the EAA event that consisted of simple one camera interview shoots as well as eight-camera coverage of the afternoon airshows. It was a live directing experience unlike any other I have had before.

We sent our stream to two trailer-mounted, 27 by 15 foot LED walls, positioned on either side of show center. We began broadcasting every day at 10:00 AM and stayed live until the end of the airshow which was around 6:00 PM. The first hour we provided a video supplement to the EAA Radio Show being broadcast from the announcer’s stand. This was a simple one camera shoot, with the camera focusing on the person being interviewed by the host. We also used video clips and stills to support the interviews when possible. During the downtime between the interviews, we ran pre-produced video packages provided to us by EAA. Along with the one tripod-mounted camera used to shoot the interviewee, we used a GoPro mounted to the outside of our trailer for a wide shot of the grounds. This shot was useful to cut to before and after the interview, so I wasn’t just cutting from a video straight to a medium shot of the guest on the announcer’s stand.

From 11:00 AM to 2:15 PM the content we were showing was mostly pre-produced video, with a few miscellaneous interviews from the announcer’s stand. The airshow started at 2:30 PM every day except Sunday and lasted three and a half hours. During the airshow we had eight different cameras running. We had two wireless cameras placed near the crowd at show center, one camera in the air traffic control tower, one camera on the announcer’s stand, one camera on the north side of show center and one on the south side. In addition to those six manned cameras, we had our GoPro mounted on the side of the trailer as well as several different feeds from wireless GoPros mounted inside or outside of certain aircraft flying in the show. We were able to show in-cockpit footage of aerobatic pilot Sean D. Tucker, the Geico Skytypers, the pyrotechnic duo Tinstix, and the famous Red Bull aerobatic helicopter, as well as a few others. We also had a GoPro mounted to the outside of the lead plane of the Honda Aeroshell team, which allowed us to see the other planes behind the leader while they performed their routine. Obviously the in-cockpit footage was incredible whenever we had it, but it was particularly effective when the announcer’s stand also had a live audio feed from the pilot. We were able to build a stronger connection between the performer and the audience by showing him or her on the LED screen while they were talking. One of the HD LED boards in action.

Directing coverage of an airshow is definitely challenging. With most live events all of the action tends to happen within the boundaries of a basketball court or a stage. Directing an airshow is completely the opposite, because the action is happening in the sky, where there are no boundaries. However, there was some fiery action that did happen on the ground on the other side of the runway. There were several acts that included pyrotechnics which, when they went off, sent a shock wave through the entire production trailer, flexing the screens of the monitors in front of me, and shaking anything else that wasn’t secure inside. The most important thing we needed to get on camera during the pyrotechnic shows was the famous “wall of fire” which covered a good stretch of the runway. To make sure we did not miss it, we had a radio tuned to the air boss frequency, so we were able to hear when and where they would be blowing the pyrotechnics. The giant walls of orange flame looked fantastic on camera. View from inside the production trailer.

The great thing about covering the airshow for seven days straight is that it gave me the opportunity to learn and improve every day. As the days went on, I was able to anticipate the action more easily, which allowed me to be ready with my shots more quickly. But of course, as soon as I started becoming comfortable to the way the show was running the first few days something new was thrown at me (at 500+ mph): the United States Air Force Thunderbirds.

This year was the first time in EAA history that the USAF Thunderbirds made an appearance at the show, so they were the most talked about act the whole week. The Thunderbirds performed on the last three days of EAA AirVenture, and for those days the crowd line was moved back 50 feet because they needed a larger aerobatic box to complete their routine. Our trailer, however, remained inside the aerobatic box, which presented a few challenges. First of all, once the Thunderbirds started their show, there was absolutely no movement allowed by us or anyone else on the ground inside the aerobatic box. This meant that our cameras had to be set long before the show began, and once it started they could not leave their positions. So, if the camera malfunctioned, lost communication, or ran out of battery, we could not send anyone out to it to fix any problems and that camera was done for the rest of the show. Another challenge we faced was the issue of the six F-16s flying 500+ miles per hour past our trailer while I was trying to communicate on headset. It was definitely one of the loudest environments in which I have directed.

Over the seven days we were at EAA AirVenture 2014, we produced some great content. Whether it was just getting a close up of a pilot’s aerobatic maneuver 1000 feet in the air or actually taking the audience inside the cockpit of some of their favorite acts, we did all that we could to enhance the airshow experience for everyone who attended the event.